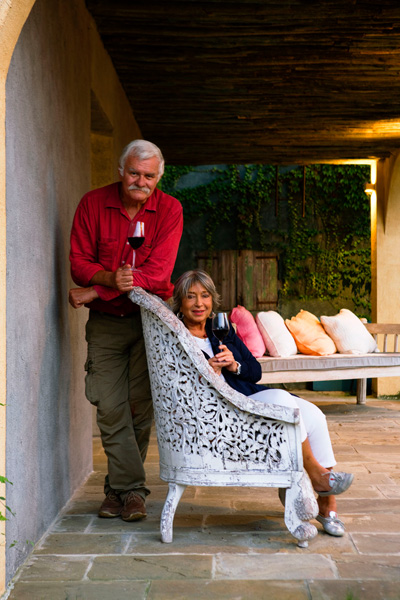 ...She is an effervescent physics teacher with passion for interior decoration, he is an enologist and a winegrower who has been raised at a workshop by Pinot Gallizio, an artist and professor at the Alba Wine School.

So the magazine TuStyle defined the hosts in October 2011. Her creativity has not been killed by so many years passed working as a physics teacher... His passion to abstractly paint using unorthodox materials (acrylics, raspberries, scents, juices, resins) explodes in the construction of industrial canvases, long rolls to sell on a meter, spans, fragments...

Two different professional paths with a meeting point: the pleasure of hospitality, conviviality, creativity. A small campus university in the countryside, an agora for encounters, for tastings, for the simple taste of sharing!
He expresses himself through art and wine, she expresses herself through the furnishings where you can read a strong effort to approach the ancient world and the lived one rich in ideas and personal experiences to the contemporary, the minimalist design, the furniture with the colorful canvases and stools... and ending with artistic ceramics and objects collected travelling all around the world.
The result: a Relais where the details make the difference.
A meeting point bursting with art, hospitality and creativity.

The old farmhouse (a building dating back to 1700 surrounded by a vineyard from which a good Dolcetto is produced, already owned by the Mollea-Ceirano family) encloses full of surprise in the interior, respecting structures with excellent contemporary highlights.

A place to live to be understood, where apparent casualty becomes certainty.
An ideal trip through sensations harmonized with refined taste, thanks to the wine to be tasted in absolute calm while admiring the panorama.